All of us at Dirt to Dinner have spent an entire year bringing interesting, instructive, and timely news and information to you, our readers. It’s been a tumultuous year for our food and agriculture system and the consumers it serves around the world. Let’s end the year by taking just a moment to look back at some of the big issues and news items in 2021 to set the stage for what should be another year of change and adaptation.

2021 is, in many respects, a continuation of 2020’s dominant story – the global Covid pandemic. But much of what occupied our attention this year on matters of food and agriculture involves the effects of the pandemic rather than the disease itself.

The Supply Chain Mess – No Easy or Quick Answers

A chain is only as strong as its weakest link, according to the old adage. 2021 helped reveal what happens when several links in the supply chain from dirt to dinner show a weakness.

Most immediately visible to consumers, perhaps, was the sporadic lack of select food products. A shortage of as many as 80,000 truck drivers helped leave store shelves thinly stocked or even empty from time to time.

Trucks handle more than 70% of our domestic freight, and “nearly every good consumed in the U.S. is put on a truck at some point,” according to the American Trucking Associations.

Our food supply is no exception.

Images of ocean vessels waiting to unload at ports showed how the transportation problems extended far beyond the local store to the entire global marketplace. Costs for ocean shipping, domestic barge cargoes, and trucking rates soared across the board, reflecting the imbalance in transportation supply and demand. Demand for food remained robust, despite the system disruptions.

The big problem wasn’t a shortage of products as much as the inability to maintain the smooth, reliable delivery system that makes our food system normally so efficient. In recognition of that reality, the Federal Trade Commission has demanded information from nine major food retailers as part of a planned investigation into the reasons behind the disruption.

A persistent shortage of workers in meat plants, dairies, and row-crop farms also played a role in disrupting the system, as the effects of Covid-19 pandemic restrictions and extensive government supports played out over the year.

Frustrated farmers, plant managers, and others across the food chain reported difficulty in finding the willing workers needed to harvest crops, maintain herds and flocks, service machinery and equipment, and all the other seemingly countless chores that go into growing, harvesting, storing, processing, manufacturing and distributing the $1.8 trillion dollars spent on food in the United States each year.

Just to put that number in context, note that the much-ballyhooed infrastructure bill passed by Congress this year costs about $1 trillion. So, when America’s food supply chain has problems, everyone sees the effect in the food choices available day to day – the prices paid for that food.

Inflation – Up, Up and Away

No one needs to be told the cost of food has been going up. We see it every day, in the prices paid at the local grocery store and the bill as the local diner, and everywhere else, for that matter. 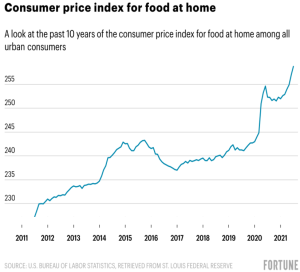 The latest data from the Bureau of Labor Statistics (BLS) pegs the annual inflation rate for food running at 6.8%.

Soaring energy costs account for a significant portion of the increase. But the cost of disruption to the supply chain, higher commodity prices, and other factors also have been playing a role in a steady rise in food costs in the second half of the year, and economists across the public and private sector caution that inflationary pressures will continue across the economy well into 2022.

What’s so significant about 6.8%? Consider this fact…

At 6.8% annual inflation, your food bill would double in less than 11 years. At the “normal” annual rate of food inflation over the past 20 years – roughly 2% – it would take 35 years to reach this level.

Climate Change – For the Better

Concern with global warming accelerated during 2021, from the halls of international organizations and national governments all the way to the farm gate.

Efforts to assess the role played by agriculture in dealing with greenhouse gases, and other climate-related issues dominated the public-policy arena and the minds of farmers everywhere.

The 26th United Nations Climate Summit in Glasgow attracted as many as 30,000 supporters and political leaders from 197 countries, where delegates reaffirmed an international commitment to reducing gas emissions and limiting the projected increase in global temperature. The meeting produced lofty words, but many observers noted that much of the actual work being done to reduce greenhouse gas emissions is being done at the local level.

Farmers, often working with various environmental groups and businesses, expanded their adoption of no-till, expanded grassland and crop rotation, and various other regenerative production techniques that help keep carbon in the soil rather than the atmosphere.

Government support for the development of carbon markets also helped drive farm-sector support for these “carbon smart” practices, as an investment in improved technology and environmentally-friendly equipment expanded sharply. The Department of Agriculture’s commitment of $633 million for “climate-smart” infrastructure investment in rural America only added to the momentum.

2021 may well be remembered as the year the ag sector’s role in climate change shifted in public perception from being a cause of global warming to emerging as a critical part of the solution to climate change.

Despite the gyrations of the domestic market, U.S. agricultural exports are projected to reach record levels in 2021.

Department of Agriculture projections for FY2021 indicate total exports could reach a record $164 billion – up almost $28 billion (21%) from last year.

The United States also continues to rely on numerous food imports, turning to foreign suppliers for about 15% of our food, including about one-third of our fresh vegetables, half our fresh fruit, and more than 90% of our seafood. The fruit and vegetable market in 2021 is estimated at about $5.2 billion, and the seafood market at $3 billion.

Perhaps unlike 2020, the politically contentious issue of U.S.-China agricultural trade seemed to recede from the daily headlines. U.S. officials continue to press China to live up to the purchase commitments made in the 2019 trade agreement, and Agriculture Secretary Tom Vilsack recently expressed concern with the declining U.S. share of total Chinese imports. 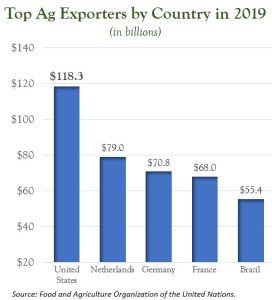 But out of the media spotlight, China remains our largest customer, buying almost 18 percent of total U.S. agricultural exports, valued at $28.8 billion.

The trade data makes an important point for producers and consumers alike. Demand for U.S.-grown commodities and food products continues to grow. The world needs food, and the United States exports more food than any other country in the world.

Even when conditions complicate the task of bringing food from dirt to dinner, rising populations and robust economies continue to drive demand – and the U.S. food and agricultural sector consistently comes through in helping to meet it.

Supply – Enough to Go Around

The supply news from 2021 is good. Despite production challenges created by drought, floods, pandemics, continuing urbanization, political unrest, and so many other factors, we continue to produce enough food to satisfy the caloric needs of a growing world.

With the U.S. corn and soybean harvest virtually complete, the Department of Agriculture reports “excellent” national results. Final figures won’t be available until the new year, but initial results indicate a very slight decline in soybean and corn yields from last year, due largely to drought conditions in select growing areas.

The take-away on supply: We continue to produce enough to satisfy a growing world demand for food.

It rarely gathered headlines in the popular media. But it sure attracted investment dollars in 2021 – and investment drives improvement, according to economists.

Even before the onset of the Covid pandemic, the global agricultural artificial intelligence market alone was estimated at just over $600 million – with projected annual growth rates of 25 percent in 2019-2025.

It’s not often shouted from the rooftops, but technology may be the single most important factor in the dramatic productivity increases of the past decade.

And now for something completely different…

From time to time, we also noticed items that didn’t quite grab headlines in the mainstream media or elsewhere. To celebrate the end of 2021 and welcome the new year, we share some of our favorite news items that few seemed to notice.

Joey Chestnut routinely grabs headlines when he wins the annual July 4th Nathan’s Hot Dog Eating Contest. This year was no different when the 37-year-old American scarfed down 76 hot dogs (and buns) in 10 minutes to win for the 14th time in his career. Less noted: Women’s champion Michelle Lasco managed to down 30 and ¾ hot dogs in the same time span. Yup, together that’s nearly 100 hot dogs in 10 minutes. It’s also close to 29,000 calories – or over 10 times the daily caloric intake of the typical person. Is this a great country, or what?

A Brazilian cow, unhappy with its prospects as a future delicious dinner, escaped and sought safety in a nearby water park, where it managed to take one last fling at fun by sliding down the park’s lengthy waterslide into the cool and refreshing pool below. Officials reportedly denied the fun-seekers request to “do it again, do it again…” but the happy animal was given a consolation prize of spending the remainder of what we all hope will be a long and happy life courtesy of a kind-hearted rancher 500 miles west of Rio de Janeiro. And BTW, the cow’s new name: Toboga, Portuguese for “waterslide.”

The fine folks in Austin, Minnesota, for years, have enthusiastically observed the glories of the pork delicacy SPAM, with parades, cookouts, and sundry celebratory events. Dirt to Dinner actually has attended this august event and can honestly report it to be one of the finest examples of true Americana anywhere. But we also must note that word has spread about another “Spam Jam” – this version found on Waikiki in Hawaii, where 7 million cans of Spam are consumed each year as a self-proclaimed “cultural tradition.” Cans of the pork delicacy are donated to local food banks if that helps explain the event’s real allure. Let’s ALL go…

And from our friends across the pond, we have this item from the village of Wonersh in Surrey, England. Police report a serial baked-bean bandit, who has a penchant for pouring the product everywhere, from doorsteps to mail slots to cars. Neighborhood watch groups apparently are on stand-by, but the bandit remains as elusive as the wind. There is no word on what snacks may be on hand or if toast also is involved. Sounds like a waste of good protein to us.

2021 was challenging, but our global food system showed remarkable resiliency and adaptability. Many of the problems we saw – such as smoothing out our supply chain and battling inflation – will take some time. But there is no need for panic or worry about the availability of the foods (and feeds) needed to maintain our food security and sustainability. 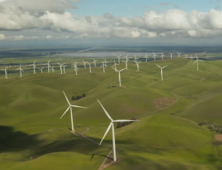 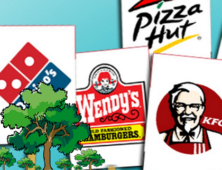