Are fermented foods key to our health?

You want to prevent disease? Then consider fermented foods. Fermentation is a chemical reaction that’s responsible for some of our most favorite food and drinks that not only taste great – they can be great for you. Here’s a look at its health benefits and how the fermentation process works.

You’re at a baseball game and throw some sauerkraut on your hotdog. You’re dashing between meetings, and you grab a yogurt to tide you over until lunch. You’re sitting down to relax after a long week and grab a little wine and cheese. Each of these tangy products are made using fermentation and contains live bacteria that can improve your health.

Fermented foods and your health

Your gut is teeming with healthy bacteria, creating a unique microbiome that some researchers refer to as our body’s “second brain”. Our other brain is the enteric nervous system which controls the entire gastrointestinal system. Weighing only 2.2 pounds, it’s a bacterial ecosystem swirling around our intestines, brimming with flora, bacteria, archaea, and yes, even viruses. Our hardworking microbiome helps us digest our food, boost our immune system, and allow our bodies to absorb much-needed vitamins from food.

When we don’t have the right balance of gut microbes that meet our body’s specific needs, then we are more prone to chronic disease, from gastrointestinal issues to neurological, cardiovascular, and respiratory illnesses. The Journal of Experimental Medicine reports increasing gut probiotics can help improve gastrointestinal conditions like diarrhea, inflammatory bowel disease (IBS), and liver disease. Scientists also point to the increase in probiotics that can help other chronic conditions ranging from gastrointestinal inflammatory, neurological, cardiovascular, and even respiratory illnesses.

Fermented foods with live cultures are like a multiplier for microbiomes. They have been shown to help us increase the amount of “good bacteria” and probiotic material (12 strains of bacteria grown together) in our gut. When a fermented food with live cultures hits your belly, it releases healthy bacteria and enzymes that make the flora in your digestive system more efficient at synthesizing nutrients. We want those probiotics to stay healthy!

Eating fermented foods is like sending a superhero to your gut. She lands in your intestinal tract and starts busting through other digested food’s cell walls, releasing the nutrients. Without our fermented superheroes – those nutrients remain trapped in the cells, unused by our bodies.

But fermented foods’ superpowers don’t stop there. Scientists have found that probiotics in some fermented foods also help reduce inflammation in the body. Inflammation has been tied to a host of metabolic and autoimmune problems. The NIH also has some promising studies showing the fermented probiotics can have a positive impact on our nervous system and improve mental health. By adding fermented foods to your diet, some scientists are finding it can also help with weight loss.

Are all probiotics the same?

All probiotics are the same if we follow the definition laid out by an international panel of experts at the Gut Microbiota for Health World Summit in 2001 and 2014. 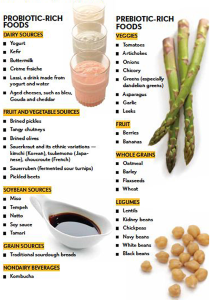 Robert Hutkins is a professor of Food Science at the University of Nebraska-Lincoln. He has spent his career studying bacteria in fermented foods and what does and does not impact their ability to survive in our gastrointestinal tract. Hutkins wants people to take the definition of probiotics seriously – especially when it comes to fermented food. Not every fermented food contains probiotics.

We were surprised to learn that the fermentation process of making certain foods can actually remove the live culture and its associated health benefits, thus losing its probiotic component. That’s true of wine, beer, and canned sauerkraut – although there may be other health benefits from eating them.

Hutkins says foods like yogurt, most cheeses, kimchi, and non-heated sauerkraut contain probiotics that can positively impact your health.

How much fermented food is enough?

The experts behind Harvard Health say there is no guidance or data on how many probiotics to consume in a day, and therefore no scientific advice on how much fermented food we should eat. Some experts argue that fermented foods shouldn’t be singled out but rather included in an overall healthy diet.

Lori Zanini, a spokeswoman for the American Academy of Nutrition and Dietetics, says about two to three servings a day of fermented foods should suffice. But, like anything, too much of a good thing isn’t always so good. Experts warn too many fermented foods in your diet could cause gas, bloating, and other gastrointestinal issues.

Sharon Flynn is the author of Ferment for Good: Ancient Foods for the Modern Gut and is considered one of Australia’s leading experts on fermented food. She says, like anything, it is possible to overdo it on fermented foods. But, Flynn notes, “You’re more in danger of having poor health from not including these things in your diet than you are from including them.”

One of the common ailments of the western diet is something called “leaky gut syndrome”. Scientists have found that microbiomes in our gut are changing from what our ancestors had, which is not necessarily a good thing. Thanks to better hygiene (a good thing) and a western diet rich in processed food (not as good), there’s an imbalance between the good and harmful bacteria in the modern gut. If this persists, it can weaken the walls of our intestines and leak its content into our bloodstream (definitely a bad thing). That condition, leaky gut syndrome, can lead to a host of bad health outcomes. Scientists now believe it could contribute to everything from Alzheimer’s disease to schizophrenia.

But Harvard scientists believe more fermented food could be the answer. Dr. David S. Ludwig, a professor of nutrition at the Harvard T.H. Chan School of Public Health, says, “most societies throughout the world and throughout time have included fermented foods as part of their diet.” It started as a preservation process: cabbage left in your fridge will go bad after about a week. If you convert it via fermentation to non-processed sauerkraut (a.k.a. not canned), it seems like it can last forever.

Thankfully food growers and producers have long recognized the benefits and popularity of fermented foods with live cultures. They’re found in almost every culture and cuisine. Historians have found signs of the fermentation process in food dating back to 7000 BC – making it likely this process has been around as long as humans.

Do food producers still use ancient processes to ferment food today? Many still do, especially in certain cultures. Some people do it at home through canning and pickling from their own fruits and vegetable gardens. 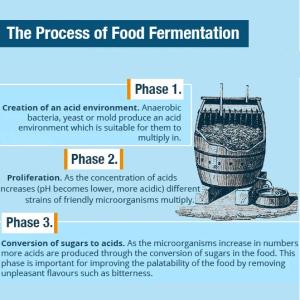 Before refrigeration, fermentation would be one of the only ways to preserve food. If you lived in ancient or medieval times, fermented foods were less likely to make you sick. It’s why most people drank beverages like beer or malted water rather than water up until the 1900s.

The term fermentation comes from the Latin fervere – which means to boil. It’s also where we get the word fervor and fervent – meaning excitable and easily worked up. And that’s a great way to think about the chemical process behind fermentation.

Fermentation is a metabolic process that takes sugars and converts them into alcohol or acid. It removes energy from carbohydrates without oxygen.

Fermentation is also known as “culturing” – you can watch this 3-minute video to learn more about this process.

Today, there’s is an increasing variety of fermented foods landing on our grocery shelves every day. We’re not limited to kombucha and sauerkraut (although at D2D, we like both).

Here’s a list of some uncommon, fermented foods starting to pop up in our local supermarket. And here’s a website exploring the vast array of fermented foods across the globe. 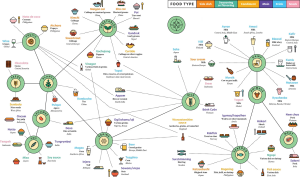 From ancient times, fermentation plays a crucial role in our food system and gut health. It can improve everything from our digestion system to our body’s ability to absorb nutrients. Since fermented foods increase the healthy bacteria and probiotics in our gut, researchers find that eating these types of food can help with weight loss, autoimmune diseases, and even Alzheimer’s disease. 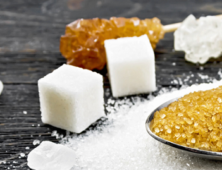 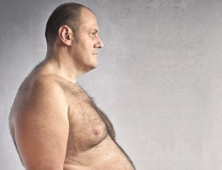 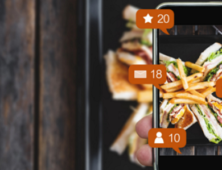 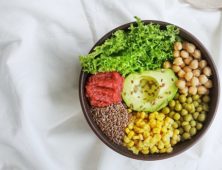 Postbiotics: You Are What You Digest 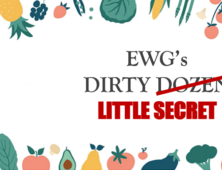 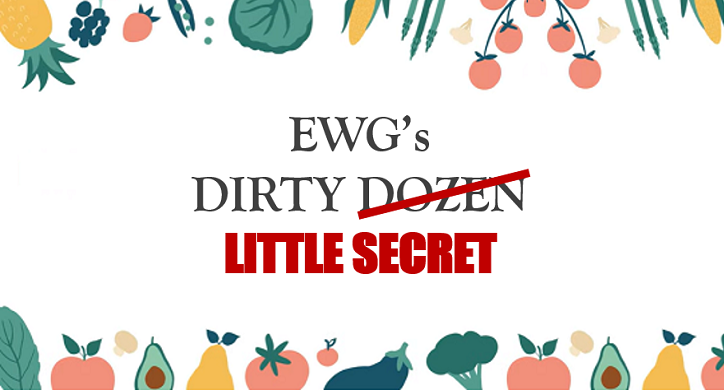 EWG’s “Dirty” Little Secret: There’s No Science Behind It 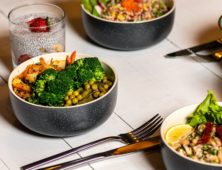 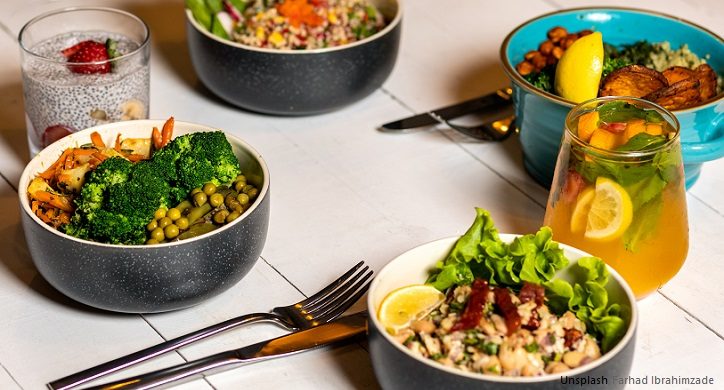