Agriculture Secretary Sonny Perdue recently cautioned Americans not to fear their food. That’s an amazing thing for any public official to do, let alone the Secretary of Agriculture. Have we really come to the point that people must be told by a cabinet-level government official that their food supply is okay to eat?

SPOILER ALERT: Your food is safe. We have one of the safest food systems in the world. But upon reflection, I can see why he made such a comment.  Indeed, there seems to be a constant avalanche of reports targeting a threat or cause for worry.  And if I don’t already fear the food, some people want me to feel guilty for not just what I eat, but almost for even eating at all.

Think I’m crazy?  Sit down in your local diner and order a meal.  Let’s go for comfort food:  meatloaf, mac and cheese, and a side salad with Thousand Island dressing.  Oh, and some apple pie with ice cream for dessert.  A glass of ice water with lemon, and maybe a nice cup of really good coffee to cap things off.

So what have I just done here?  How does this food get me into a maze of controversies about human, animal and environmental welfare?  Let’s look at it piece by piece, or bite by bite, if you prefer.

Let’s start with the meatloaf…

It’s hamburger, plus some breadcrumbs, some spices and maybe a few chunks of peppers or mushrooms.  Maybe I sprinkle some salt and pepper on it, and a touch of ketchup, just for flavor.

Now I’m afraid to even think about the mac & cheese…

As for the salad…

You know, I used to love my apple pie…

Now I’m feeling a little squeamish about it!

Maybe a sip of water will help calm me down…

But wait a minute.

Let’s just forget about the coffee…and the sugar or artificial sweetener I put in it, or the milk.  I no longer care where the coffee beans came from, or who picked them, or much of anything else.  I certainly don’t care if the milk came from a cow or an almond.  I don’t even want to think about how much energy was needed to cook all this, or to heat the hot water they will use to wash up.

Now my appetite is pretty much gone, thanks to all this thinking I’ve been doing.  So what do I do with all this left-over food on the plate?

Or maybe I just stop eating.

Phew. I just woke up from my nightmare.  But this sounds ridiculous, doesn’t it?  However, this is just a superficial look at some of the issues that surround the food we eat these days.  Actually, there are a great many more than these to consider – real, serious issues that people in the food sector wrestle with every day in trying to satisfy the public demand for safe, sustainable food.

Educating worried consumers on our food system is one of the big reasons why we created this blog, so you’re in luck.  People want to know more about our food system: where their food comes from, how it is produced, how it is delivered, how we keep it safe and make it as wholesome as possible, and more.  We all need to know, and, frankly, we should know.  And thankfully, farmers have a great story to tell.

There is no way to adequately describe the commitment, the resilience, the innovative and entrepreneurial spirit of the men and women who produce, farm, ranch, and those who manufacture the food products, and those who prepare the food we need and want.  We look forward to continued innovation and advancement in our established food system. And what we hear is loud, clear and unequivocal faith in the future of food.

Never underestimate our farmers and producers. When commitment, capability and capital converge – look out. All things are possible — including food that people don’t fear, and a food system that doesn’t induce guilt. If you want to learn more about how our food is grown, food safety, and food waste, take a look at these posts for more information:

Farming and production: Where do our fruits & veggies come from? | What is the Farm Bill | America’s salad bowl | GMOs: a recipe for understanding

Food safety: There is no such thing as a dirty vegetable | CDC foodborne illness detection | Food safety at farmers’ markets

Maybe our food system isn’t perfect yet. We need all the intelligence and technologies possible to feed a growing population while regenerating the land. We’re doing a better job today than we did yesterday, and we’ll do a better job tomorrow than we do today.

Indeed, it’s a great big world of possibilities — except maybe for a decent tasting diet cola.

It takes a concerted effort to address all the questions people raise about where their food comes from and how we make sure our food system conforms to the larger societal goals of fairness, sustainability and transparency. It’s an enormous challenge… and we believe our farmers, processors, and food companies are doing an incredible job of meeting all those expectations while continuously improving the safety and sustainability of our food system. 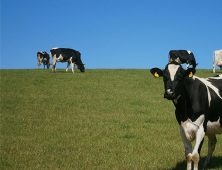