Does glyphosate—the world’s most heavily-used herbicide—pose serious harm to humans? 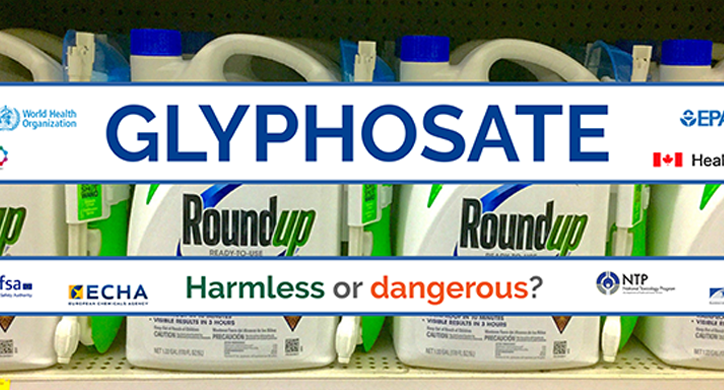 This post is featured content from the Genetic Literacy Project
and was originally published on March 26th, 2019.
The author, Kayleen Schreiber, is GLP’s infographics and data visualization specialist. She researched, authored and designed the infographic which is linked to at the bottom of this post.

Does glyphosate—the world’s most heavily-used herbicide—pose serious harm to humans? Is it carcinogenic? Those issues are of both legal and scientific debate.

In two court cases—one decided in mid-March and the other last year— juries have ruled that glyphosate, sold in non-generic form under the trade name Roundup and made by Monsanto (now a division of Bayer), caused the cancer of workers who applied the herbicide. Neither case addressed the issue of whether glyphosate might cause harm to humans exposed to parts per billion or parts per trillion traces of the pesticide found in foods.

Courts do not determine scientific fact

Of course, a jury decision, while significant, is not a substitute for scientific research. Juries have also gotten science wrong, most infamously the decision in the ‘Scopes Monkey Trial’ in which high school teacher John Scopes was found guilty of teaching evolution, which creationists contended was not scientifically supported.

Cases like these that revolve around the question of whether a particular chemical is the cause of cancer or another illness are not science. They rely on lay juries attempting to make sense of complicated and often contradictory medical studies and expert opinions. Science rarely renders absolute ‘verdicts’; it addresses probabilities. It’s been shown time and again that when juries are asked to evaluate studies that conclude ‘substance x is unlikely to cause cancer’, they almost always assume the worst, that because the study did not definitively conclude it ‘does not’ or ‘could not cause cancer’.

But no scientists writing a reputable study would ever use the kind of absolute statements that would put a jury at ease. Hence, when jurors have even slight doubts, they frequently rule against a chemical and its manufacturer, and for an aggrieved (and often fatally ill) plaintiff, even when the evidence is slim or close to nonexistent.

For example, just last year, a Missouri jury awarded $4.69 billion to women with ovarian cancer they claimed was caused by Johnson & Johnson baby powder. In April 2018, the company was ordered to pay $117 million to a New Jersey man with mesothelioma, and $25.7 million to a Los Angeles woman with the same cancer.

As Popular Science has reported, the company is appealing those verdicts, and for good reason: They don’t appear to comport with the science.

Medical studies on the relationship between ovarian cancer and talcum powder use on the genitals are not at all definitive, with none showing a strong association and most showing no association at all. The National Cancer Institute says the evidence is not strong enough to conclude that talcum powder causes ovarian cancer, and the American Cancer Society notes that any existing risk is likely small, and that research is ongoing.

What the legal system considers enough evidence to establish that exposures causes illness is different from the standards of science—and trying to fit the two together can be hazardous. Which brings us back to the controversy over glyphosate.

What do regulators and investigatory agencies conclude?

Even though extensive research has been done on glyphosate, there remains intense debate online and in the media about whether the herbicide poses a health threat to agricultural workers or the general public as a result of residues in food.

More than a dozen regulatory and research agencies have conducted long-term studies, reviews and assessments to determine whether glyphosate when used as labeled, increases the risk of certain cancers. They are unanimous in one finding: There is no evidence that glyphosate poses any harm to consumers worried about trace residues in their food. Despite many blogs by anti-biotechnology advocacy groups touting ‘studies’ (usually not very scientific, such as here, most recently) finding glyphosate in beer or cereal at the parts per billion or parts per trillion level, or finding traces of glyphosate in blood or urine, there is no scientific study that suggests those trace residues pose any threat to humans.

The Genetic Literacy Project summarized and analyzed the findings of the world’s top regulatory and research organizations in a GMO FAQ posted here on our GMO FAQ section. To date, every regulatory agency that has evaluated glyphosate has concluded that it is safe if used according to label specifications and does not increase cancer risk, particularly if glyphosate residue is found on food, including produce.

This infographic summarizes the conclusions of the most prominent agencies. The global consensus is concisely expressed by Health Canada, the oversight agency that most recently issued a re-review of the controversial pesticide: “No pesticide regulatory authority in the world currently considers glyphosate to be a cancer risk to humans at the levels at which humans are currently exposed,” Health Canada wrote in January 2019.

In addition to the many assessments and evaluations, a large and long-term study known as the Agricultural Health Study has monitored the incidence rate of multiple cancers in 54,251 pesticide applicators, including 44,932 who had handled glyphosate since 1993. The study found no association between glyphosate and any solid tumors or lymphoid malignancies overall. The data is ambiguous in workers exposed at very high levels.

The only outlier is the International Agency for Research on Cancer (IARC), which does not look at the risk posed by a particular chemical. Rather, it examines hazard—whether a substance might cause cancer at any exposure rate or dose, even unrealistically high ones. In 2015, IARC put it in the category “probably carcinogenic to humans,” along with red meat and hot beverages. But there was less evidence of carcinogenicity than the agency found for bacon, salted fish, oral contraceptives and wine, among many examples.

Over more than 40 years, the agency has assessed approximately 1,000 substances and activities, ranging from arsenic and beer and coffee to sunbathing and hairdressing. It has found only one agent or activity that was “probably not” likely to cause cancer in humans. Under a hazard designation, almost any substance can be judged toxic, even water, if the dose is extreme and the exposure time is long enough. The hazard-risk distinction is almost totally absent from the popular and media discussion of whether glyphosate might pose any serious danger.

IARC is a sub-agency within the World Health Organization of the United Nations. Its ‘hazard’ conclusion that glyphosate should be in the category “probably carcinogenic” has been used to support proposed bans on glyphosate and was the central piece of evidence in the two recent trials. Three other WHO agencies including WHO itself performed risk assessments on glyphosate and repudiated IARC’s findings, but their far more comprehensive analyses are usually ignored in media accounts or not even considered by juries.

Click on the image below to see a summary of all the most respected research. The bolded conclusions will take you to the document issued by the regulatory or research agency.