5 Differences Between GMO and CRISPR 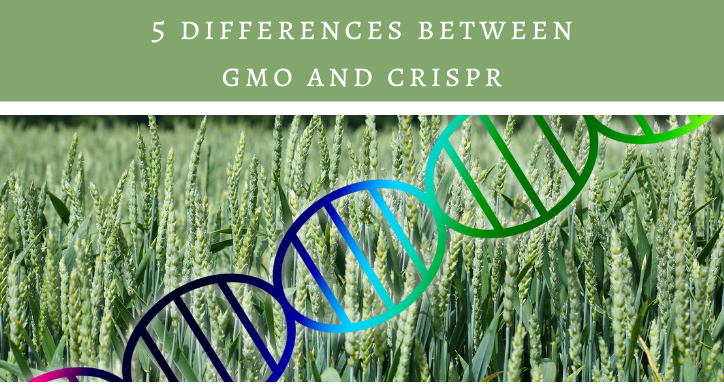 GMO and CRISPR are two technologies that help farmers grow our food with fewer pesticides, less water, and less impact on the environment. But, these technologies work in different ways and provide us with various opportunities.

GMO and CRISPR work differently. For GMOs or genetically modified organisms, a gene is transferred from one species to another to provide an organism with a new trait—for example, a pest-resistant or drought-tolerant crop.

CRISPR is much more precise. It alters or deletes DNA from the same species to reach the desired outcome, again like pest resistance or drought tolerance.

As you may have noticed above, not only does the process of GMO and CRISPR differ, but also who they’re made for. GMO is used for different species, as genes are transferred from one species to another one. For example, in Bt Corn, Bt, a natural insecticide, is taken from the soil and inserted into corn, making the corn pest resistant.

CRISPR, on the other hand, is only used within the same species. An example of this is drought-tolerant corn. CRISPR uses genes already within the species to achieve the desired outcome.

Unlike GMOs, CRISPR can do more than simply edit genes; it can also eliminate them altogether. Because CRISPR is so precise and used within the same species, it can delete DNA to reach its desired outcome.

One example of this is the non-browning mushroom. Here, the gene responsible for browning is silenced or deleted. This way, the mushroom achieves a longer shelf life, leading to less food waste.

2. CRISPR Can Be Used for Natural Evolution

1. CRISPR Can Also Be Used on Humans and Animals

CRISPR is used on more than just plants. Humans and animals can also receive benefits through this technology. For humans, scientists are using CRISPR technology to find cures for Type I Diabetes, Alzheimer’s, and other human diseases.

In terms of animals, scientists have been working to introduce genetics from Angus cows born without horns to dairy cows. With this, dairy cows can be saved from the pain of manual horn extraction (disbudding).

Both GMOs and CRISPR are promising technologies. They can help us achieve less food waste, healthier plants and can even help us feed the growing population in the years to come.

How will CRISPR impact our food?

What’s the Difference between GMOs & CRISPR?